First discovered in the Denver Metro area in the early 2000s, Japanese beetle (Popillia japonica) has since moved throughout the Front Range.

Adults emerge in late-summer and feed on ornamental and agricultural plants.  The females lay eggs in the soil where the larval form overwinters.

Adults feed on flowers, fruit, vegetables, and foliage.  They aggregate in groups to feed and to mate. The beetles are iridescent green, with tufts of white hairs along the edges of their abdomen.  They are about ½ inch long. For adult beetles, hand removal works well if done persistently.  Or use of an insecticide may be warranted.

The larvae feed on the roots of plants and are especially harmful to lawns and turf.  They are soft bodied, C-shaped, and about ¾ inch long.  Control focuses on the larval form using conventional and bio-insecticides. 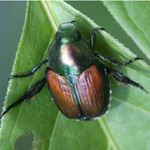 Japanese beetle adults feed on over 300 types of plants.

Since 2006, Japanese beetle has spread along the Front Range and is now well established. Jeffco Invasive Species Management is supporting a statewide effort to better understand this insect’s habits.

We launched this statewide project to track early emergence and document the preferred Colorado hosts.