Bee of the Month 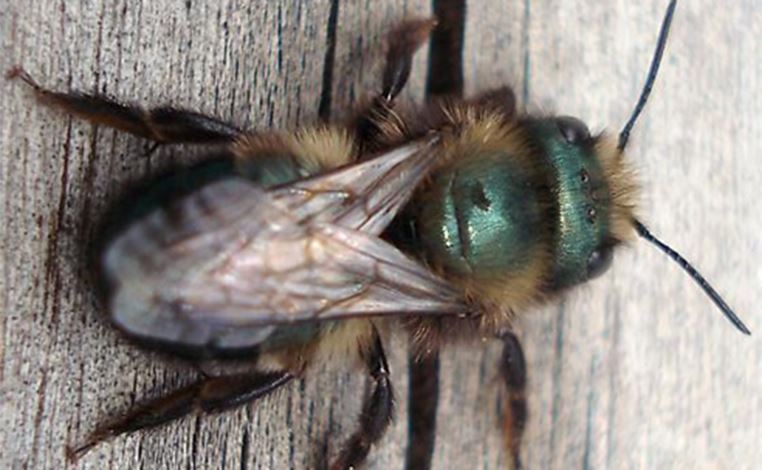 The blue orchard bee is a beautifully colored cavity nesting bee species, active in the early spring to summer. This bee is partially domesticated by humans due to its easy-to-control nesting habits.

Bees in this species nest in small, already made cavities in wood or other structures, including human-made structures (they are known to occasionally nest in garden hoses or abandoned pipes). Humans have created structures to support these bee species and actively breed them for agricultural purposes.

Because these bees are active in the early spring, they are important pollinators of trees and shrub species, including important trees for agriculture. Their importance in the agricultural industry is how they derived their common name, the orchard bee. They are particularly efficient at pollinating apple, pear, and cherry trees, but are effective pollinators of many different plant species.

Be sure to thank this bee species the next time you are eating an apple, pear, or cherry! 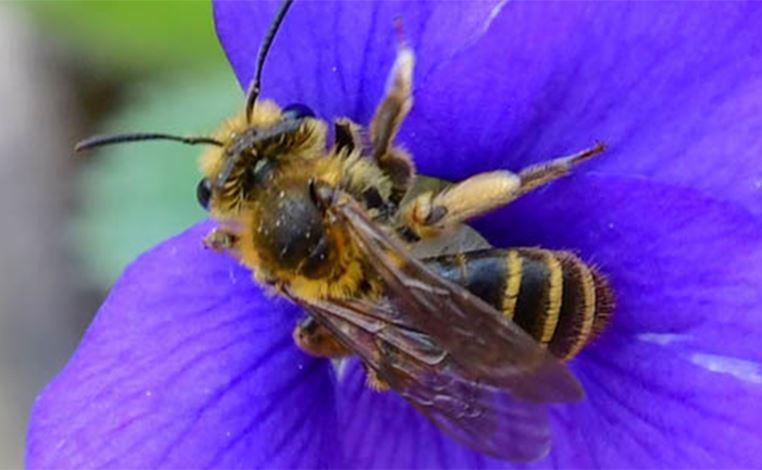 Violet miner bee (Andrena violae) is a medium sized, pollen specialist bee. Bee species that are floral specialists only collect pollen from plants in specific genera or families. In the case of the violet miner bee, this species collects pollen exclusively from plants in the violet genus (the picture above shows this species on a blue violet plant). Because of this specialization, these bees must time their emergence with the flowering time of violets. As such, they are usually found flying around in early spring from March to April.

Bees in the Andrena genus nest in the ground in sandy soils, often under shrubs or trees. This species is mostly found in the eastern U.S.; however, Colorado’s unique ecotypes allow this species to persist in relic habitats in the northern Front Range. Be sure to look out for these bees on wild violet blooms in the early spring! 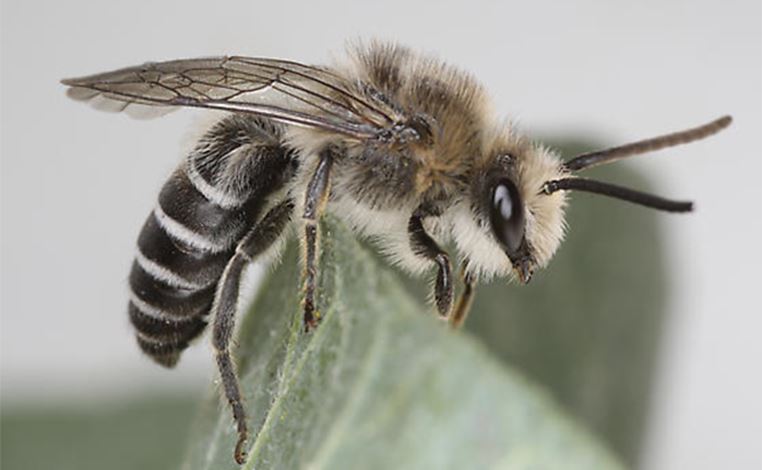 The compact cellophane bee is a late summer emerging ground nesting bee species. These bees dig long narrow nest tunnels deep into bare soil and then create horizontal off shoots from the main tunnel in which they lay their eggs. This species is a solitary bee, meaning there is only one female bee in each nest. The “queen” gathers pollen and nectar from nearby flowers and creates pollen balls (a combination of pollen and nectar molded into a small ball like structure) on top of which they lay one single egg. Once an egg and pollen ball are placed into the horizontal tunnel, it is closed and sealed off.

Cellophane bees line their nest cells with a material that is waterproof and looks like plastic when it is dry, hence their name, cellophane or polyester bees. These bees have a forked tongue that allows them to create this unique material. In addition to the waterproofing, bees in this genus also line their nest cells with a natural bactericide and fungicide, linalool, for extra protection against diseases.

Although this species is solitary, females have been known to nest in aggregations, so there can be hundreds of bees in the same area. All bees in the genus Colletes are non-aggressive, so these aggregations are a great place to witness solitary ground nesting bees in action! 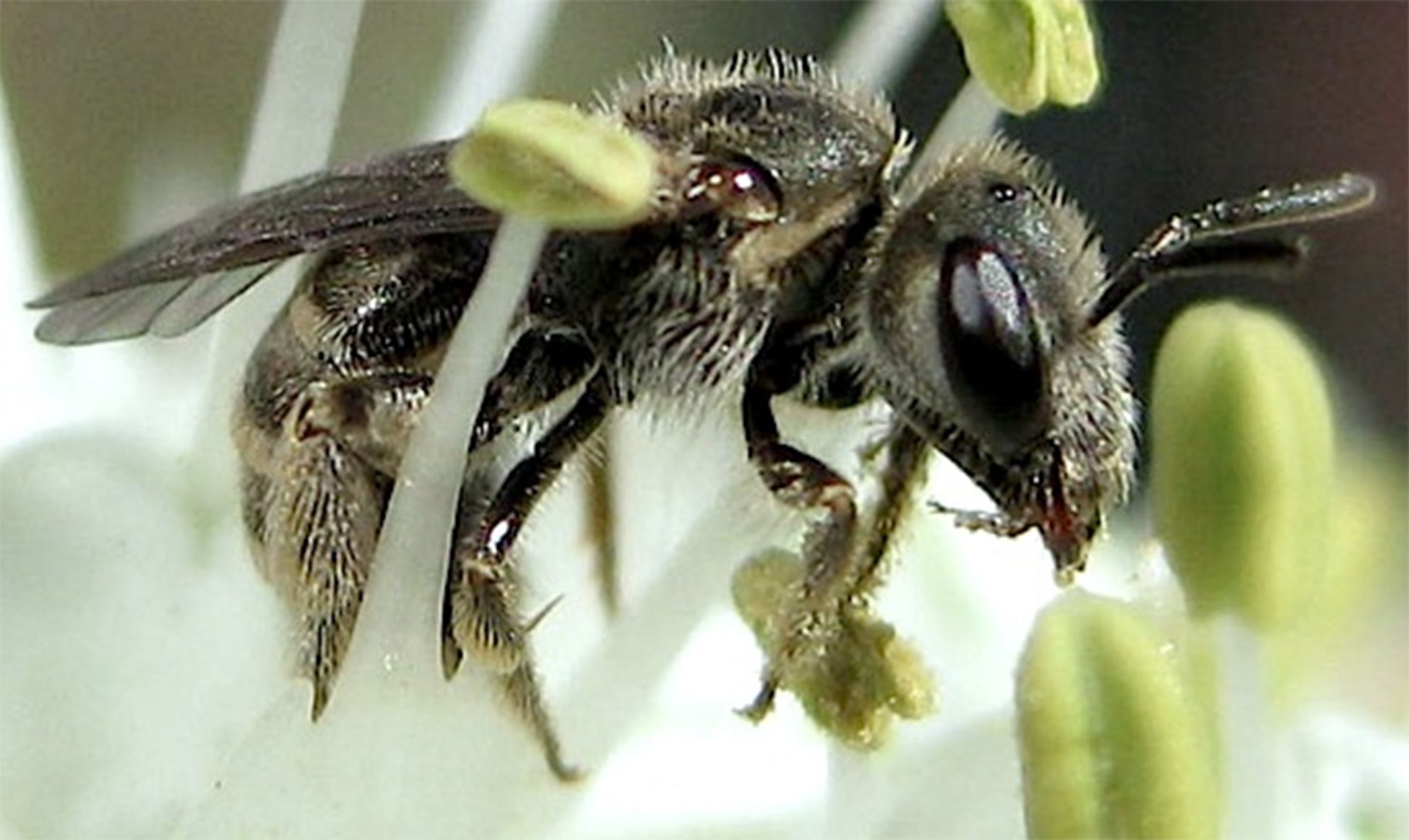 Tripartite sweat bee is a very small, generalist bee species in one of the most common bee genera in North America (Halictus). Bees in the genus Halictus are the most abundant species of sweat bees, and are some of the most abundant native bees found in ecosystems in Colorado. This species is broadly distributed across North America, with its range stretching from southern British Columbia down to Mexico and from the west coast to Missouri.

Sweat bees derive their name from the unique behavior of being attracted to human sweat, which they drink for its salinity. This species of bee (and all sweat bees) nests in the ground in small holes in bare soil. This particular Halictus species is also semi-social. Daughter bees remain in the nest to assist with brood care instead of colonizing their own nests.

Tripartite sweat bees are floral generalists, meaning they will visit plants in many different families to collect pollen and nectar. These bees can be seen from spring to early fall, so the chances of coming across this species in open space areas or even in your garden is very high! They are very small and move quickly from flower to flower, so make sure you stay very still and focus on one or two flowers in a large patch to catch a glimpse of these bees. 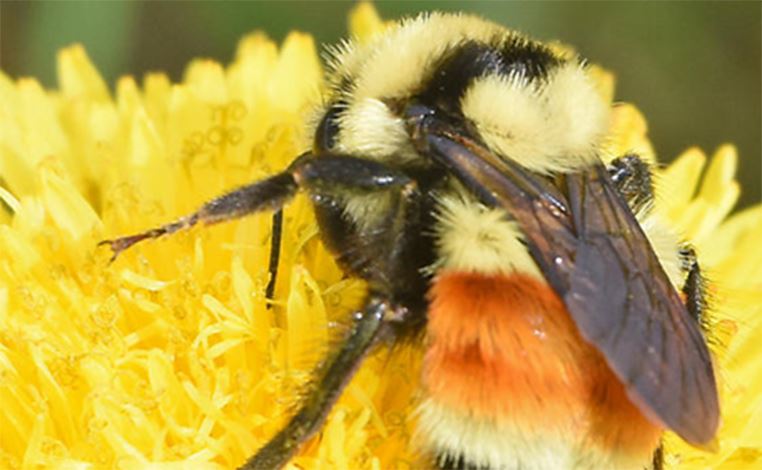 Bumble bee species are somewhat unique in the bee world in that they are some of the only bee species that are highly social. A single colony of the Hunt’s bumble bee can have around 1000-2000 members throughout the growing season. In the beginning of the summer (March-May), Hunt’s bumble bee queens will emerge from their overwintering nests and begin searching for a new nest to start their colony.

Once a nest is established, the queen will begin producing unfertilized female worker bees, which are significantly smaller in size than the queen. These workers carry out most of the pollen and nectar collection for the remainder of the season. Colony sizes reach their maximum around mid-summer (June). Then, near the end of the summer, the queen begins producing larger females (presumed to be next year’s queens), as well as male bees.

At the end of the growing season, the queen, all worker bees, and the males perish, with only next year's queens surviving the winter.

Make sure to look out for this species in parks and open space areas and in your garden! 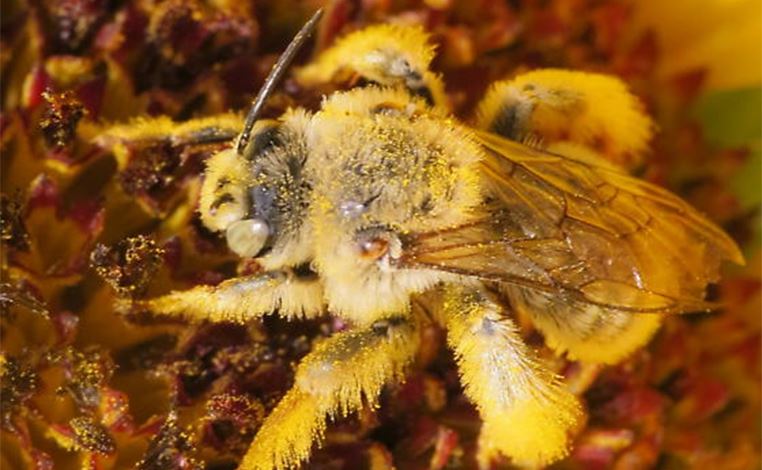 Sunflower chimney bee (Diadasia enavata) is a solitary ground nesting bee species that specializes on a subset of plants in the Asteraceae (Sunflower) family. Bees in the genus Diadasia are often called chimney bees because they create chimney-shaped structures on top of the entrance to their nest.

Research suggests a few explanations for this behavior. The first is that these “chimneys” prevent debris or other insects coming into their nests. The other explanation is that they use the extra soil to plug their nest holes after they have laid their eggs.

Bees in this species time their emergence from their nest when their host plants begin blooming (mid to late summer). They are very efficient at collecting pollen from these host plants (as seen in the picture) and provide invaluable pollination services in their ecosystems.

They are one of the most common and widespread bee species in the Diadasia genus and can be seen across most of North America. Be on the lookout for these bees on sunflower blooms in late summer! 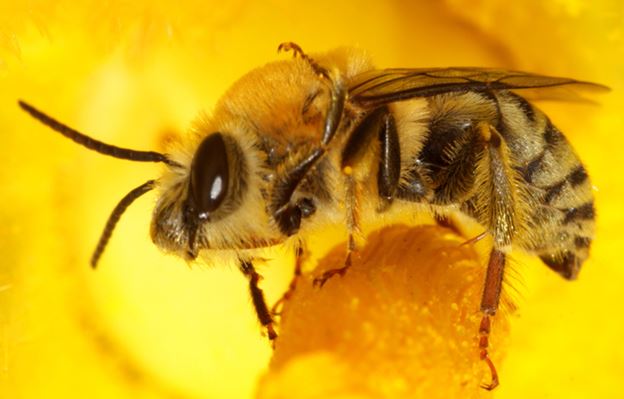 Squash bee is a solitary bee species that specializes on plants in the Cucurbita genus (squash and gourd plants). Because of this specialization, females only collect pollen from plant species in this genus (summer and winter squashes, pumpkins, gourds, etc.), hence why this bee’s common name is the squash bee. These bees are similar in size to honey bees (although they are a bit larger) and are sometimes misidentified as such, however, squash bee females nest in the ground in well-drained bare soil and males can often times be found resting in squash flowers. A defining characteristic of this bee species is their foraging behavior, collecting pollen around sunrise, when squash plants open their flowers. This bee species occurs throughout the United States and Mexico and is active in the mid-summer (June-August).