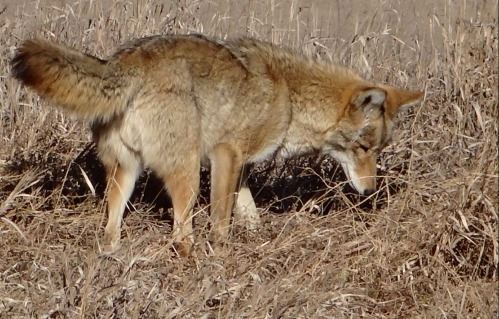 Coyotes (Canis latrans ) are medium sized canines native to the plains of North America.  They are very adaptable and can now be found in most areas and habitats including urban areas.

Coyotes feed on animal and vegetable matter and are considered to be opportunistic feeders.  Their diet varies depending on the season and availability of prey.  They will sometimes prey on livestock or pets.

Adults have grayish and red fur, are 3-4 feet long, 15-44 pounds and live 6-8 years in the wild.  Their territory varies greatly and can range from 0.15-24 square miles.  Coyotes often live in areas near humans and may sometimes become aggressive if they are protecting their territory.

Females give birth in the spring and litters average 6 pups but may be as many as 15.  The pups are raised in dens and may become independent at about 8 months although they will sometimes stay longer with the family unit.

CPW classifies coyotes as a game species in Colorado and they may be taken year-round with either a small game or a furbearer license. Landowners may kill coyotes, without a license, on their land if the coyotes threaten their property or livestock.

For information about living around coyotes visit CPW’s Living With Wildlife site.