George C. Swadley, a native of the Shenandoah Valley, Virginia, was an early Colorado pioneer who arrived here in 1859. After mining for a short while, he began farming in 1860 in the area that later became Arvada. Swadley was instrumental in the planning and construction of the Swadley and Wadsworth irrigation ditches in 1860 and 1861. As a farmer he developed a strain of sweet corn known locally as "Swadley corn." He was an owner of the Jefferson County Bank which became the First National Bank of Arvada, of which Swadley was President from 1904 to 1906. 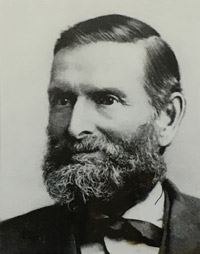