Donald Stanbro was raised in Springville, New York and later lived in Duxbury, Massachusetts and Highlands, New Jersey. He served four years in the U.S. Navy and received a political science degree from Syracuse University. Stanbro came to Evergreen, Colorado in 1967 where he owned Stanbro Real Estate Company. He was a Board Member of the Georgetown Historical Society and Evergreen Scholarship Association, and a senior instructor in the University of Colorado’s graduate realtor program. After his term as county commissioner, Stanbro moved to Englewood, Florida in 1989. There he started Stanbro Travel in North Port, Florida and was active in local community affairs, serving on the boards of the North Port Area Chamber of Commerce and the Tourist Development Board of Sarasota County. 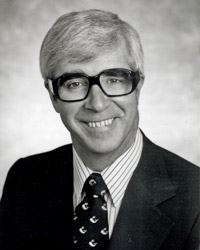