James S. Scott came to Colorado in the early 1860s, probably from his native Indiana. His first employment here was in the Gilpin County mines of Henry M. Teller. In 1863 Scott moved to Golden where he was employed for many years as the first master mechanic for the Colorado Central Railroad. He was an active member of the Masonic Order and served as Master of Golden's Masonic Lodge in 1865 and 1870. Sometime after 1870 he left Golden and lived in Cheyenne, Wyoming, western Colorado and Utah for many years. In 1905 he returned to Colorado and settled in Boulder. 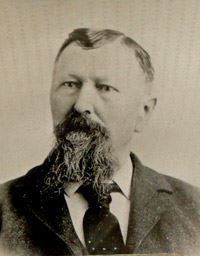