George W. Parfet, Jr. was elected Commissioner in 1938, and died in office in 1940 from injuries suffered in a dynamite explosion in his clay mining operation at Golden. Commissioner Parfet, a Golden native, operated the Parfet Clay Mines that had been started by his father in the 1870s. He was active in the Masonic Order and, as Worshipful Master of the Golden City Lodge, No. 1, A.F. & A.M., performed the Masonic Burial Rites at the funeral of William F. "Buffalo Bill" Cody on Lookout Mountain in 1917. 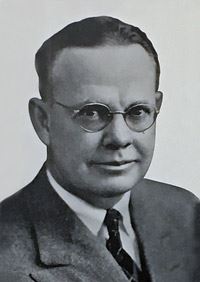