George M. "Ozzie" Osborne, a native of Pearisburg, Virginia, moved to Colorado in 1945. Prior to his election as Commissioner, he worked as a land appraiser for the Jefferson County Assessor; established Osborne Literary Services, a correspondence school for writing; was a free lance writer and Literary Critic for the National Writer's Club in Denver; taught creative writing at the University of Denver; and served in the U.S. Army during World War II, retiring as a Captain. Commissioner Osborne supervised the County Engineering Department, promoted the initial development of the County Airport and Fairgrounds, and helped establish a Credit Union and insurance program for County employees. After his term in office he operated Ozzie Osborne Realty for 12 years before retiring to pursue free lance writing. Osborne was an active member of many civic organizations including the Wheat Ridge Youth Council, Wheat Ridge Service Club, and Jefferson County United Fund. 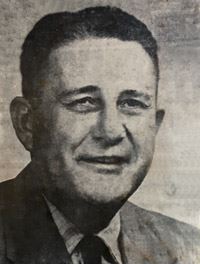