John Nicholls was born in South Wales and worked in English lead, tin and copper mines from the age of eight. In 1865 he immigrated to the United States and worked in Pennsylvania as foreman of the Lehigh Valley Coal Company for eight years. He came to Golden in 1873 where he operated nearby coal mines. He was elected Night Watchman for Golden in 1874 and Golden City Marshall in 1875, and served as a Deputy Sheriff from 1877 until his election as Commissioner. After his term as Commissioner, Nicholls served as the elected Sheriff of Jefferson County from 1884 to 1888, and as Mayor of Golden in 1889. A decade later he was elected Sheriff again and served in that capacity from 1900 to 1907. 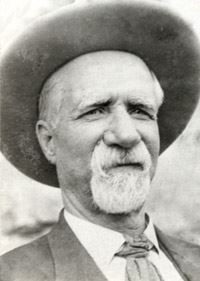