Kevin McCasky was elected Jefferson County Commissioner (District 2) in November 2004, and re-elected in 2008. Prior to being elected Commissioner, McCasky was elected and served as Jefferson County Assessor from 1998 - 2004. He served as Chairman of the Jefferson County Board of Commissioners and the Jefferson County Law Enforcement Authority Board in 2009, and also served as the Chairman of both Boards in 2006. He represented the county on the Jefferson Economic Council, the Boundary Control Commission, the Jefferson Parkway Public Highway Authority (chairman), the Noxious Weed Advisory Board, the CleanLaunch Board of Directors, and as alternate on the Denver Regional Council of Governments and the Criminal Justice Strategic Planning Committee. The West Chamber honored McCasky as the 2006 Elected Official of the Year, which was the second time he received that award and the only person in the Chamber’s 60 year history to receive the award twice. Previous to joining Jefferson County, McCasky served on the staff of Congressman Joel Hefley in Colorado's 5th District and worked as a Legislative Budget Analyst for the Joint Budget Committee of the Colorado General Assembly. He is a graduate of the University of Northern Colorado with B.A.s in Geography and Political Science. He is married to Lori and they have two sons, Tyler and Nick. 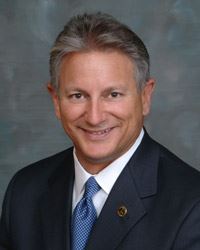