Rudolph Koenig was elected Commissioner in 1886 and resigned in February 1889. Born in Canton Berne, Switzerland, he immigrated to the United States with his parents in 1856, and settled in Allegheny County, Pennsylvania. Koenig moved from Pennsylvania to Golden, Colorado in 1867. There he manufactured brick for about five years, and then managed the Golden Smelting Works from 1879 to 1888. Koenig served as Mayor of Golden in 1885 and 1886. In 1889 he resigned his position as Commissioner and moved to Weld County where he operated a large cattle ranch until his death. 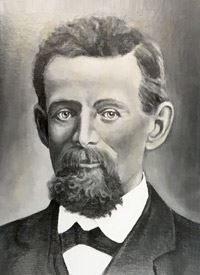