George K. Kimball was appointed Commissioner by the Governor in February 1889 to succeed resigned Commissioner Rudolph Koenig. Born in Boston, Massachusetts, Kimball came to Denver in 1860 from Wisconsin. He mined at Blackhawk until the fall of 1861 when he was mustered into the 2nd Colorado Infantry, in which he served as an officer until 1864. From 1865 to 1870 he was superintendent of the Lode Star Mining Company at Russell's Gulch in Gilpin County. Subsequently, Kimball was Golden station agent for the Colorado Central Railroad (1870 to 1873), and postmaster of Golden (1873 to 1884). Later he was Golden City Clerk (1886 to 1889) and Superintendent of Water Works for four years prior to his election as Commissioner. 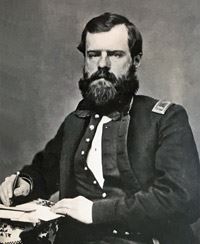