Gus A. Johnson was elected Commissioner five times and served twenty years, longer than any other Jefferson County Commissioner. Born in Sweden, he immigrated to the United States with his parents at the age of six. He moved to Denver about 1885 where he engaged in the grocery business. In 1899 he settled on a farm northeast of Golden where he lived the rest of his life. Commissioner Johnson was a strong supporter of road development in the County, first for horse drawn conveyances, and later for automobiles. 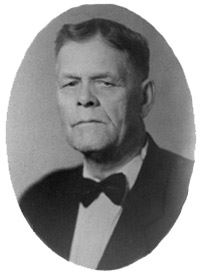