William Huntsbarger was born in Wichita, Kansas and moved to the Evergreen area of Jefferson County in 1960. Prior to moving to Colorado he worked as a hotel manager and traveling salesman and owned two car dealerships. He had a lifelong interest in aviation, which became his primary career. Huntsbarger became a licensed pilot in 1929, was an executive with Cessna Aviation Company and was a member of the board of the American Association of Airport Executives. He was manager of the Jefferson County Airport from 1962 to 1971 and was instrumental in its early development and success. Between 1962 and 1965 he also served as Director of Industries for Jefferson County. Huntsbarger was appointed Commissioner by the Governor in 1971 to complete the term of resigned Commissioner Chester Hoskinson. He was a resident of Dewey, Arizona at the time of his death. 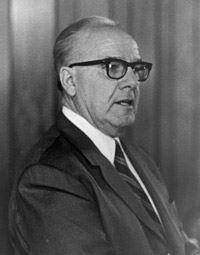