Chester L. "Chet" Hoskinson moved to Colorado from his native Kansas in 1941. He was the first home builder and developer in Arvada where he operated Hoskinson Development Company until elected Commissioner in 1960. Prior to his election as Commissioner, he served one term on the Arvada Town Board. Commissioner Hoskinson was instrumental in creation of the Jefferson County Airport Authority, actively promoted the Airport's development, and served on the executive board of the Public Land Commission. Commissioner Hoskinson resigned in February 1971 to accept an appointment by Governor John Love to the State Industrial Commission. He was honored as the first Arvada Chamber of Commerce Man of the Year in 1951, and was a long time member of the Lion's Club and Masonic Order. 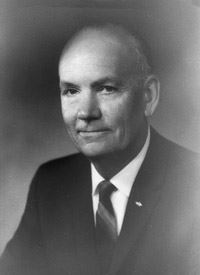