Kathy Hartman was elected as a Jefferson County Commissioner in November 2006 and was sworn in on January 9, 2007. Hartman was appointed to the state Child Welfare Advisory Committee, Training Sub-Committee, by Governor Ritter and in 2008 chaired the Metro Area County Commissioners. For 16 years she had been the executive director of Stride, a non-profit agency that assists more than 300 homeless and low-income families each year in Adams, Arapahoe and Jefferson counties. Prior to that, she worked as an investment advisor for seven years for two major Wall Street firms. Dedicated to public service, Hartman was a member of the board of the Jefferson Center for Mental Health, and she also served on the board of the Tri-County Workforce Center and Jeffco Adopt-a-Family from 1991 to 1992. A founding member of the Good News Coalition, she has been very active in community and civic organizations. Among them are the Rotary Club of Golden, the Colorado Mountain Club and the Colorado Renewable Energy Society. She earned a bachelor’s degree from the University of Michigan in Ann Arbor and an MBA from Wayne State University in Detroit. 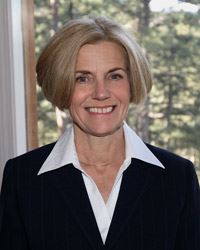