James G. Biggins was elected to two terms as Commissioner, and then was appointed Commissioner by the Governor in 1946 to succeed resigned Commissioner Clyde W. Morris. Biggins, born in Sorento, Illinois, worked as a coal mine laborer in Montana, New Mexico, and Leyden, Colorado prior to World War I and served in the Army during that war. He then returned to Leyden as a coal mine foreman. Before his election as Commissioner, Biggins served in Jefferson County as Deputy Assessor from 1927 to 1931, Sheriff from 1931 to 1935, and as Mayor of Arvada from 1936 to 1938. 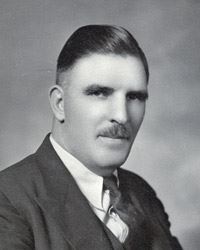