Edward L. Berthoud immigrated with his parents to the United States from his native Switzerland at the age of two in 1830. He was raised in upstate New York, graduated from Union College in Schenectady, N.Y. in 1849 trained as a civil engineer and surveyor, and worked on a variety of railroad projects during the 1850s. Berthoud arrived in Golden, Colorado on April 18, 1860. In 1861 he discovered Berthoud Pass and surveyed a wagon route from Golden to Utah. During the Civil War he served as a lieutenant and captain in the 2nd Colorado Infantry and 2nd Colorado Cavalry. Berthoud became one of Golden's most prominent citizens, serving as Speaker of the Colorado Territorial Legislature in 1866, County Surveyor from 1875 to 1878, and Golden Mayor in 1890. He surveyed and supervised construction of many railroad lines in Colorado and the West, primarily for the Colorado Central Railroad. Berthoud was an early supporter, faculty member, and board member of the Colorado School of Mines, and an amateur scholar of history, botany, and ornithology. 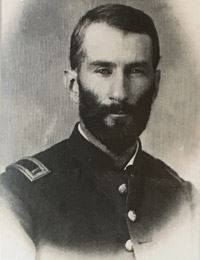