Thomas C. Bergen came to Colorado in 1859 and became one of the first residents of the mountain area later called Bergen Park. He built a cabin there in July 1859 and moved his family from Illinois the following summer. He farmed and operated a boarding house in Bergen Park along one of the main roads into the mountains until 1875, when he moved to a location two miles south of Morrison. There he raised stock and developed a pond for commercially raising trout. He was a member of the first state legislature and of the People's Convention that petitioned Congress for Colorado statehood. Bergen was elected to a two year term on the first Board of County Commissioners, and was reelected twice. In 1885 he moved into Morrison, and later moved to Phoenix, Arizona, where he died. 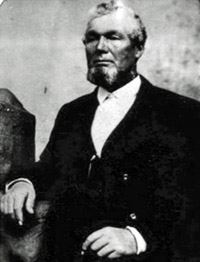