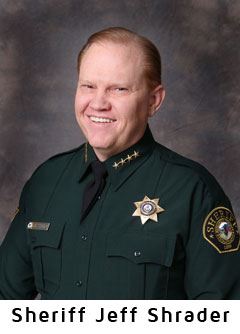 Jeff Shrader began his career with the JCSO in 1984 as a deputy assigned to the county jail. Prior to being elected sheriff in 2014, Sheriff Shrader oversaw operations as chief of each of the four major divisions of the Sheriff’s Office. He is a graduate of the FBI National Academy and the National Executive Institute, an executive development program for the largest law enforcement agencies in the country.

Sheriff Shrader has proactively led the 825 men and women of the JCSO and the nearly 300 volunteers who provide valuable support to the sheriff’s office’s mission. He has also been effective in administering the organization’s $110 million budget, continuously seeking ways to improve the agency’s services and efficiencies.

Sheriff Shrader is involved in many professional organizations, serving as a board member for County Sheriffs of Colorado (CSOC) and as an active member of Major County Sheriffs of America (MCSA). In the spring of 2019, he was invited and began to serve on Governor Polis’ COVID Task Force as a respected member and representative of law enforcement.

Sheriff Shrader has long-established roots in Jefferson County. He holds a Bachelor’s degree in Management of Human Resources from Colorado Christian University and has completed coursework towards a Master’s of Business Administration at Regis University. In addition to growing up here, Sheriff Shrader raised two daughters who continue to live in the Denver area with their families. He and his wife Jane live near Golden and enjoy motorcycle rides and spending time in the mountains - especially with their family, to include two granddaughters, twin grandsons and their most recent addition, a third grandson.

Since being elected Sheriff, Jeff Shrader has: