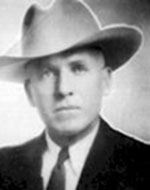 Undersheriff Fugate went to Lee's Tavern in Arvada with intentions of arresting Jack Carleton, the bartender, who earlier in the evening shot a man in the bar for flirting with his wife. Fugate was accompanied by two deputy sheriffs, who stood by the doorway while the undersheriff entered the empty tavern and confronted Carleton.

During an interview relating to the location of Carleton's gun, the suspect told Fugate that his gun was in the kitchen. Fugate searched the kitchen briefly, found no gun, and returned to the bar where Carleton was waiting. Without warning, Carleton opened fire on Fugate, killing the undersheriff. The two deputy sheriffs returned fire on Carleton, wounding him five times before taking him into custody. Carleton recovered from his wounds and was sentenced to life in prison without parole.