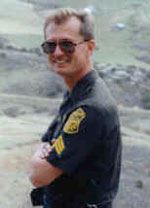 Killed in the line of duty April 28, 1995, in southeast Jefferson County, Colorado.

Sergeant Mossbrucker was the first officer on scene of a shooting inside a food store where two citizens were murdered. The gunman fled to the parking lot, obtained a large caliber rifle from his van, and waited for the first police officer to arrive.

The suspect, Albert Petrosky, opened fire on Sergeant Mossbrucker from across the parking lot as the sergeant approached the store. The fatal bullets impacted Sergeant Mossbrucker through the windshield of his patrol car. Petrosky was sentenced to life in prison without parole. He was awaiting transfer to prison when he committed suicide in the Denver County Jail.