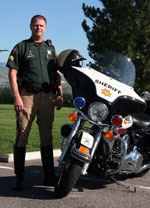 Killed in the line of duty January 26, 2014, in north Jefferson County, Colorado.

Sergeant David Baldwin was struck on his motorcycle by a wrong-way driver on Highway 93. Baldwin, a 27 year veteran, was conducting traffic patrol at the time. The driver was traveling southbound on the wrong side of the road to pass another vehicle when the collision occurred. He later plead guilty to vehicular homicide and was sentenced to six years in community corrections.