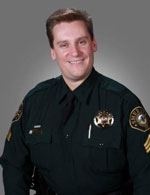 Killed in the line of duty January 3, 2015, in west Jefferson County, Colorado.

Sergeant Sean Renfro was killed on U.S. Highway 285 east of Conifer after he stopped to help a brother and sister with a baby who had been involved in a crash on the snowy highway. Sergeant Renfro, a 15 year veteran of the Sheriff's Office, was aiding Colorado State Patrol by directing traffic when the driver of an SUV lost control, crossed over the center line, and struck him, a bystander, and one of the vehicles involved in the original crash.