To provide for the safety of the traveling public through the efficient use of manpower and equipment. To remove accumulated snow, provide traction materials where required on snow and ice covered roads, in order to maintain access to the roadway system by the traveling public. To provide this service throughout the county within acceptable parameters of budget and resource allocation.

The Road & Bridge Division is currently responsible for snow removal on 2,900 lane miles of paved roads and 700 lane miles of gravel roads in the unincorporated areas of the county. One lane mile is a 10-foot wide section of road one mile long. State highways, private roads and newly constructed roads that have not been accepted by formal resolution of the Board of County Commissioners are not included.

The Road and Bridge Division is on a twenty-four hour, early-warning alert system. Supervisors utilize local, national, and customized weather forecasts and databases in order to anticipate and be prepared for the intensity of storm forecasted. Equipment is made ready for sanding and plowing during normal working hours for a forecasted storm.

Each equipment operator is assigned a specific route for snow removal and sanding. Assignment of roads to a route is determined by area supervisors based on priority of the road as defined below and for the most efficient utilization of equipment.

Plowing and sanding operations take place in four phases during a storm. The order in which streets are plowed in each phase is based on the following definitions of priority:

Phase I:  Initial opening of all Priority 1 through 3 streets in that order. Severity of the storm may delay response time for Priority 3 streets due to the fact that initial opening of major arterial streets requires that multiple lanes be plowed in each direction.

Phase II:  Plowing and sanding of problem roads having steep inclines, curves, bridges or overpasses.  Widening of any Priority 1 through 3 streets deemed necessary. Repeat plowing of all streets initially opened as snow continues to accumulate.

Phase III:  Removal of packed snow and ice on all Priority 1 through 3 streets where possible and deemed necessary as snowfall accumulation stops. Plowing and sanding operations on Priority 4 streets will take place as resource availability allows.  It could be several days after the snowstorm has ended before Priority 4 streets are initially plowed. Intermittent sanding as necessary by road priority.

Phase IV:  Storm event is over. Continuation of widening operations to improve safe travel and prepare for additional accumulation during subsequent storms.

Application of Traction Materials:  Sanding of most roads is limited during heavy snowfall because the sand is quickly covered and then removed as additional plowing occurs.  When applying sand, special attention is given to sections of the road network posing specific safety concerns.  These include, but are not limited to, areas such as: school and hospital zones, police and fire stations, bridges and overpasses, turn lanes, acceleration or deceleration lanes, approaches to intersections that are stop sign or signal controlled, curves, steep grades, heavy traffic areas, areas of ice accumulation, speed bumps, and areas with other known problems.

Driveways:  Driveway approaches affected during Phases I, II, and III are the responsibility of the property owner or resident to clear.

Mailboxes and Fences: Mailboxes, newspaper delivery boxes or fences installed alongside the traveled roadway are at the risk of the owner.  If an operator strikes a mailbox or fence with a plow, the operator will report it and we will repair it as soon as possible.  Mailboxes and fences damaged by snow load during normal plowing operations are not the responsibility of the County.  If a mailbox is struck by a plow, it will be replaced with a standard rural mailbox.  Postal regulations require residents to clear snow in front of mailboxes to allow for mail delivery.

Snow Pushed onto County Street or Right-of Way: The practice of pushing or throwing snow onto or across Jefferson County streets endangers the traveling public as well as county snowplow operators.  Jefferson County residents as well as private contractors may receive a warning and/or summons for snow pushed onto County streets and rights-of-way from sidewalks, driveways, parking lots, etc.

Vehicles Parked or Abandoned: Streets on which vehicles have been abandoned or otherwise parked so as to restrict the safe and continuous operation of snow removal equipment may not be plowed until those vehicles are removed.

Snowed-in Jefferson County residents who experience a life-or-death emergency should call 911. The Sheriff’s Office will work with Road and Bridge crews to get emergency vehicles through.

All other requests for emergency snowplowing should be directed to the Jefferson County Sheriff’s Office. Valid requests will be forwarded to the Road and Bridge Division, which will respond as soon as possible.

For information about the plowing of streets in unincorporated Jefferson County, please see the Snow Removal FAQs page or call 303-271-5200. 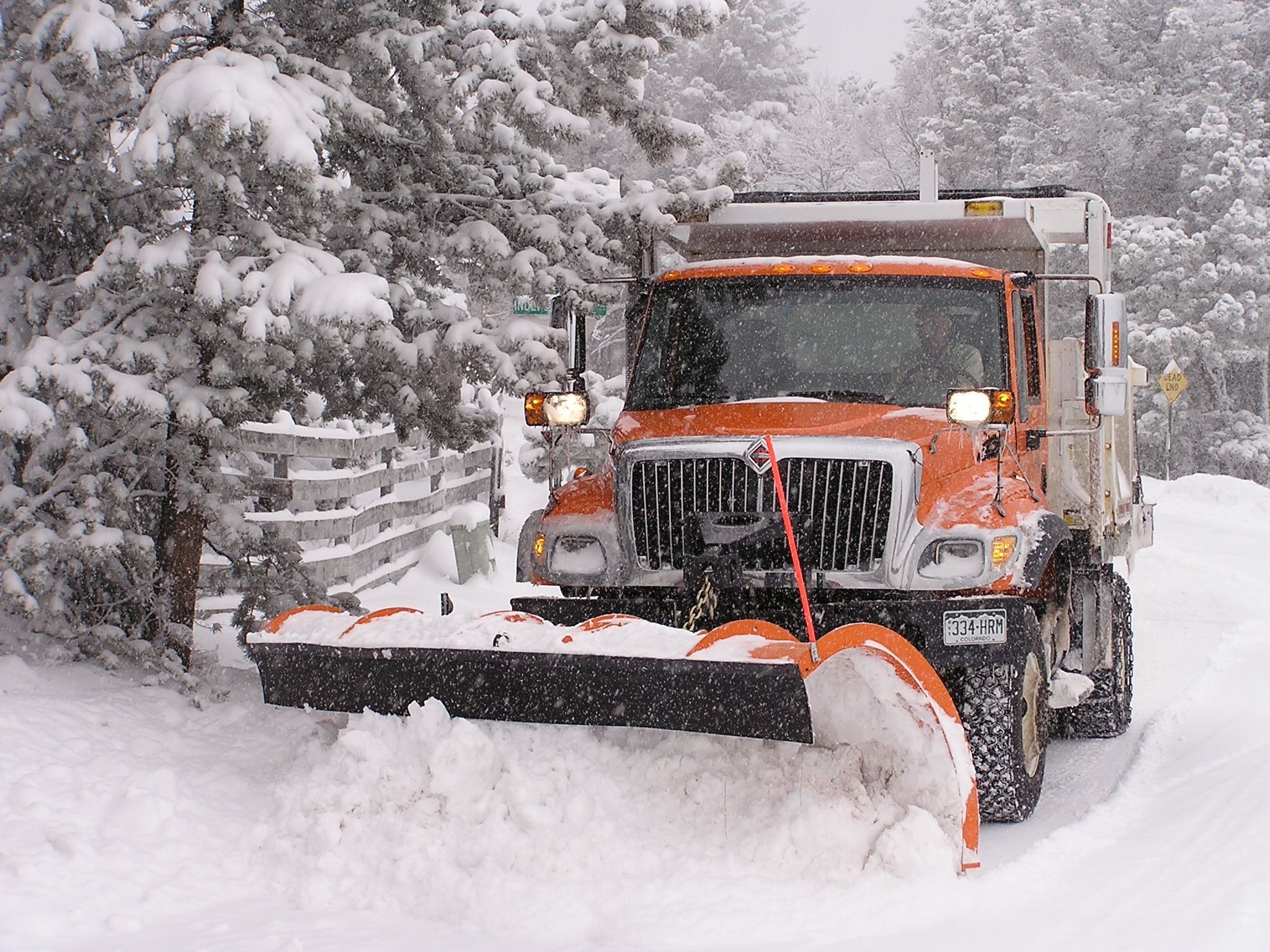 The Road and Bridge Division is responsible for maintaining over 3,600 lane miles of road network in unincorporated Jefferson County. During major snow events, delivering efficient snow removal and ice control to Jefferson County residents and travelers is the division’s primary responsibility. The main focus is to keep roadways passable to deliver emergency services and ensure the best possible conditions for safety and mobility of the transportation system. In order to make the most efficient use of available resources, Road and Bridge established priorities for clearing roadways. During major snow events, snowplowing and ice control operations will be performed continuously on Priority 1 (main arterial roads). Once Priority 1 roads are completed snow removal will began on Priority 2 (collector roads, school zones, and bus routes). Priority 3 (residential and local roads) will be plowed once Priority 2 roads are completed. Priority 4 (cul-de-sacs and dead-end roads) will be handled once the snow event is over and all Priority 1,2 and 3 issues have been addressed. During storms with large accumulations of snow, residential roads are plowed down the center of the street in an effort to avoid covering sidewalks, parked cars and blocking driveways with snow. Additionally, snow plows and wind create snow berms known as windrows where the road and driveway intersect. Removal of snow in driveways is the responsibility of the property owner or resident. Because of many weather variables encountered, maintenance requirements will differ for each snow and ice event.

Please be patient as there will be an inconvenience during major snow events. Snow operations are labor intensive and equipment does fail on occasion.