West Nile Virus (WNV) infection is spread by the bite of infected mosquitoes. This virus is named after the West Nile region of Uganda where the virus was first isolated in 1937. In North America, WNV first appeared in 1999. In Jefferson County, it was first confirmed in 2002.

Most people infected with WNV will have no symptoms. About 1 in 5 people who are infected will develop a fever with other symptoms. Less than 1% of infected people develop a serious, sometimes fatal, neurologic illness such as encephalitis (inflammation of the brain) or meningitis (inflammation of the lining of the brain and spinal cord). It is prudent for everyone to protect against mosquito bites.

Not all mosquitoes transmit WNV. Of the 40 or so kinds of mosquitoes in Colorado only two or three are expected to be transmitters of WNV. The most prominent include the Culex pipiens, and the Culex tarsalis, which are both found in Colorado. Aedes vexans is another transmitter that is found locally.

Any standing water that has the potential to breed mosquitoes is the responsibility of the property owner or governing municipality, meaning they must provide all WNV monitoring and control activities on their property. This applies to all cities, parks, special districts and private property in the county.

It is important to realize that WNV can be debilitating and life-threatening. Your backyard or patio is not a "safe zone." Even a quick trip to the trash, barbecue or garden allows time for an infected mosquito to bite. Everyone should take precautions to avoid mosquito bites.

The best way to prevent WNV is to avoid being bitten by mosquitoes this summer and fall. Residents should also eliminate standing, stagnant water where mosquitoes breed. 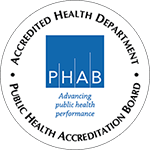