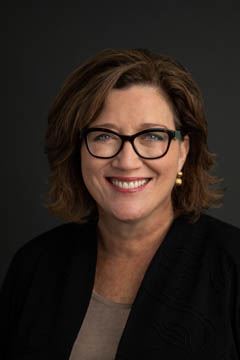 Lesley Dahlkemper is a resident of south Jefferson County.  She was elected to her first four-year term in November 2018.

She currently serves as the Chair for the Board of County Commissioners and on the following boards and commissions:

Commissioner Dahlkemper has thirty years of combined experience in strategic communications, community engagement, nonprofit leadership, public policy and journalism.  Most recently, she served as the Vice President of Strategic Engagement and Communications for the Colorado Education Initiative (CEI), providing vision and strategy as a member of its executive leadership team across the organization’s five initiatives, forty-five employees and $14 million budget.

Prior to her work with CEI, Lesley founded in 2003 a national award-winning communications firm that specialized in helping leaders engage communities and advance initiatives for student and teacher success for ten years.  Earlier positions include leading a $6.5 million grant at the Education Commission of the States for school improvement nationwide, and working with stakeholders at a national level and in large urban school districts as a senior director with a premier education communications firm in Arlington, VA. Lesley has written and presented extensively about community engagement, strategic communications and school improvement to Harvard University’s Labor Management Program, American Association of School Administrators, National School Boards Association and other organizations. She served as vice president of associate members on the Education Writers Association Board of Directors and is the past president of the Colorado School Public Relations Association.  Beginning her career as a journalist for Colorado Public Radio, she contributed stories to NPR, The MacNeil/Lehrer Report, The Osgood File, the BBC and Rocky Mountain PBS and she won national recognition for her coverage of education issues.

Originally from Chicago, Lesley moved to Denver in 1989 after obtaining her master’s degree in journalism from the University of Illinois.  Lesley and her family have called Jefferson County home for twenty-four years. She is married to former Colorado Senate Minority Leader and attorney Mike Feeley, who was elected to the West Metro Fire Board in May of 2018. Their daughter, Grace, is a sophomore at Lakewood High School who’s active in choir and speech and debate. They live in unincorporated south Jefferson County with their three rescue dogs, Lola, Peaches and Maisy.  They enjoy hiking, reading and traveling.

Learn more about Commissioner Dahlkemper, her priorities and goals as she serves the citizens of Jefferson County via the video below.