"Colorado has the best outlook of any state I know. She is rich in resources and when conditions improve, as they are beginning to, Colorado will be among the country's leaders. I have every confidence in the future of Colorado." 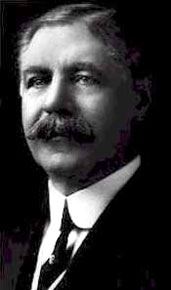 So spoke Charles Boettcher (1852-1948), one of Colorado's most famous citizens, as he neared the end of his prolific career. In Colorado, "Boettcher" is practically a household name, with the Denver metropolitan area boasting the Boettcher Concert Hall, the Boettcher Foundation, the Boettcher Scholarship and, of course, the Boettcher Mansion. But what do we know about the man behind the name and the legacy he left behind?

Fortunately, Geraldine Bean's 1976 book, "Charles Boettcher: A Study in Pioneer Western Enterprise," plus papers and other items contained in The Boettcher Collection, document nearly every aspect of Mr. Boettcher's personal and professional life. Born in Kolleda, Germany in 1852, Charles left his native land in 1869 to join his older brother, Herman, in Cheyenne, Wyoming, where he was working at a hardware store. After Herman landed him a job in the store, Charles quickly carved a niche for himself by learning the tinner's trade.

By 1870, Herman had bought the business from his employer, renaming it "H. Boettcher and Company." The deal included another store in Greeley, Colorado, which Charles took over. Boasting the motto, "Quick Sales and Small Profits," the business was practically an overnight success, prompting the brothers to expand to Fort Collins. By the time Charles arrived there in 1872, he was ready for a change of pace. The next year, he was fortunate enough to meet Fannie Augusta Cowan, who had just arrived from Kansas for a visit with her uncle. Never one to waste anything (especially time), Charles had proposed to and married Fannie by April 1874.

That summer, when Fannie returned from a trip back to Kansas to visit her family, the couple moved to Boulder to open another hardware store. Along with his new partner, William P. McKinney (Herman's father in law), Charles rented a commercial structure on Main (now Pearl) Street, purchasing the inventory of the former occupants, Phillips Brothers Hardware Company. Once again in the right place at the right time (a knack that would last his lifetime), Charles and his store prospered as Boulder's own population burgeoned. When the partnership with McKinney foundered, possibly over a dispute concerning expansion of the business, Charles sold McKinney his share of the business and subsequently bought another hardware business and lot just one block away. By 1876, he had acquired the stock of his remaining rivals, which gave him a virtual monopoly on the sale of blasting powder (a much coveted mining supply).

During this exciting period in Colorado history (it became a state the same year the United States celebrated its centennial), Charles and Fannie were happily ensconced in Boulder, building their first house and raising their son Claude, who was born in 1875. It is said that Charles, brought up by a stern Prussian patriarch, was a doting father who often took his family along on his frequent train trips to Denver.

In 1877, Charles traveled to the east coast on a shopping spree for his store, and in 1878, he took the plunge and built an elaborate two story building in a prime spot - the southwest corner of Broadway and Pearl. The keystone marking the entrance of this imposing red brick building (now the Haagen Dazs ice cream store on the Pearl Street Mall, with an exterior that has been sandblasted and remodeled), still bears its original inscription, "C. Boettcher A.D. 1878." At its grand opening in February 1879, the store was touted as "one of the handsomest in the state and the largest hardware store in Colorado."

By the late 1870s, it was clear that Charles Boettcher excelled at selling hardware. As he later remarked, "Hardware is one of the best businesses there is. I like that line. I was brought up in it. Axes and hammers don't go out of style like so many other things." He was quick to see the profits that could be realized from the silver boom, which had overtaken Leadville. As the story goes, the day after Charles first learned of the silver strike from a newsboy on Pearl Street, he turned the operation of the Boulder store over to an assistant and was en route to the "City in the Clouds."

By March 1879, Herman was in Boulder to run the business while Charles attempted to cash in on the mining craze. Although he later regretted moving his family at such a happy time in their life, always the businessman, he admitted: “the die was cast, it was too late to look back; I determined to follow out my decision vigorously come good or ill.” Having paid a mere $6,000 - considered a bargain - for two lots on Harrison Street (Leadville's business district), he scrambled to erect a building, a feat he accomplished by bribing a local lumberman. A subsequent, second story addition included space for an apartment so that Charles, who was working nearly round the clock, could spend more time with his wife and son.

Now grossing nearly $40,000 monthly, there was no stopping Charles, who began to rise first within and then above Leadville's bourgeoisie circles. In 1882, he managed a short vacation, traveling with his family to visit Herman in California. While visiting other relatives on the way back, the trio stopped in North Park, Colorado, where they filed a homestead claim that eventually blossomed into the 180 square mile Bighorn Ranch. Unable to oversee the property from Leadville, the Boettchers enlisted John Riggen, the husband of Fannie's sister, Alice, to manage the land, which at one time served as home to about 600 horses, some of which were purebreds imported from Europe.

By 1884, Charles had purchased a wholesale hardware business in Denver, renaming it the Boettcher Hardware Company. Well aware of the advantages of location, he soon relocated to 402 Lawrence St., expanding his inventory to include everything from the mandatory nuts and bolts to housewares. As in Leadville, the building was adjacent to the slightly larger Daniels & Fisher's store, which soon became a well known Denver landmark and shopping destination (May D&F).

After surviving 11 years in Leadville, with business opportunities there continuing to wane, and profits from the Larimer Square store beginning to wax, the Boettchers were spending more and more time in Denver. Springing up in an area known as Brown's Bluff, Capitol Hill became "the place to be", and that is where many prosperous Denverite decided to build their private domains. By 1892, noteworthy architectural landmarks like The Brown Palace Hotel, a triangular shaped sandstone structure designed to fit into a wedge shaped lot at 17th and Broadway, were already in place. 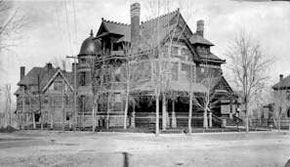 1201 Grant St. While it was not as grand as some of its neighbors, in Charles' mind it was "complete in every detail [and] as well built as any place in Denver." And, although Charles was still a few dollars short, his home was well placed along "Millionaire's Row."

By 1900, Charles was nearly 50. Having tried and rejected retirement (he went on to work almost 50 more years), he turned to his native Germany for new business ideas. Always the entrepreneur, Charles returned from a "grand tour" of Europe (taken with Fannie, 25-year-old Claude and 10-year-old Ruth) with visions of starting sugar beet and cement industries. Shortly thereafter, two extremely lucrative enterprises - The Great Western Sugar Company and the Portland Cement Company - were launched in Colorado.

Business is probably what first brought Charles Boettcher to Lookout Mountain. His donation of cement no doubt facilitated the construction and completion of the Lariat Trail from 1911 to 1914, making the mountain a popular tourist destination, particularly in the summertime. In 1915, the same year he was named president of the Denver & Salt Lake Railroad, he and Fannie separated. Charles first took up residence at the Denver Club, later moving into a suite at The Brown Palace Hotel, which he later purchased. But since their separation was not permanent for at least two more years, it is likely that they both enjoyed "Lorraine Lodge" in the beginning. By 1920, however, Lookout Mountain became Charles' exclusive stomping ground. The following excerpt from Geraldine Bean's book paints a lively portrait of his life here: 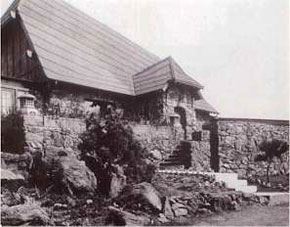 "Having built this elegant mansion on Lookout Mountain in 1917, Charles Boettcher often drove the Lariat Trail to Golden and Denver, which involved negotiating a series of switchbacks, hairpin turns and horseshoe curves on a steeply graded gravel roadway, hundreds of feet above Clear Creek. In the summer months, Charles traveled this route twice every day.

On one particularly beautiful morning in early June 1919, his attention was distracted momentarily by the loveliness of the day and he allowed his sleek gray roadster to gather speed dangerously as it descended the mountainside. Startled, he slammed on the brakes, causing the briefcase on the rear shelf to topple forward and strike him on the back of the head. He lost consciousness briefly, during which time the car left the road and was impaled on a huge boulder overhanging a sheer cliff. Summoning help, he had the vehicle pulled back to the road, found it relatively undamaged and proceeded to the office, seemingly unperturbed by the narrow escape. To Charles, the automobile was a challenge. He liked fast cars and was impatient with associates who criticized his driving habits. Invitations to ride with him were graciously declined whenever possible." 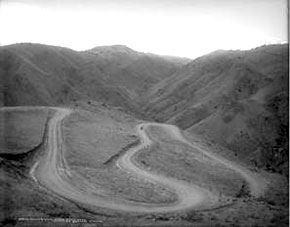