Designed by prominent Denver architects Fisher and Fisher, the Boettcher Mansion was constructed of native stone and timber, much of which was taken from the site. The use of indigenous materials was what prompted Denver Municipal Facts, a newsletter produced by the City of Denver, to comment in 1920:

, designed by Fisher and Fisher. In the Arts & Crafts style, it surmounts the hill of which it seems a crowning member. In fact, it is next to impossible to ascertain at certain points of the structure, where the natural formation ends and the architecture begins. The Mansion is almost a part of the earth and rock."

In the early 1900s, it was quite popular for wealthy Coloradans to build elaborate summer homes in the foothills for entertaining and leisure activities. As Denver Municipal Facts commented 10 years later, in 1930:

"There are a number of opulent members of Denver society who literally "live in the clouds" in a manner befitting royalty. Great stone castles have been built in the mountains and they are far more luxurious than any royal domicile which you may read about in a continental guide book or historical novel. Standing on a high, secluded spot on Lookout Mountain, is the home of Charles Boettcher. This great house built of gray stone might well have been designed for the seclusion of a warrior. The interior is of stone and the walls project copper and wrought iron lights which add to the ancient castle atmosphere. The colossal stone fireplace, and the windows that frame magnificent mountain scenery, are features of this luxurious home. It was here that Queen Marie of Rumania tarried for lunch when she visited." 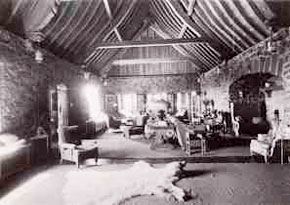 The mansion incorporated both English Tudor and American Arts and Crafts elements. Tudor characteristics include the half-timbered, stuccoed exterior and heavy wooden doors. Craftsman features include clipped gables, overhanging eaves and exposed beams and rafters. It is important to note that, before the lobby was added in 1986 to what was then the rear (north) elevation (replacing a leaking back porch), the main entrance was reached via the carriage drive, which led to the steps up to the patio (once laid extensively with patterned brick). The projecting center vestibule, with its heavy oak door, served as the grand entry.

In the Fireside Room (the original "Grand Hall"), there is a cathedral-style ceiling with timber beams notched to resemble animal faces, a massive stone "inglenook" (walk-in) fireplace flanked by oak benches (exact replicas of the originals) and a series of arched doorways. In the dining room, there is a hand-crafted oak and tile buffet table (inspired by one the architects originally designed for the mansion). While the rustic wrought-iron lighting fixtures, adorned with evergreen trees and pinecones, were recently installed both inside and out, the terra cotta lanterns on the patio walls are original to the home.

Sleeping porches, another common feature of Craftsman-style architecture, can be seen on the west elevation. They not only offered cooler temperatures on warm summer nights, but many doctors believed that breathing the crisp mountain air prevented and/or cured tuberculosis. Once screened in, the sleeping porches were later glassed in by the Breeden family when they resided here year round. These rooms connect to the original bedrooms, now used as dressing rooms and meeting areas.

Several years ago, the mansion was repainted and wallpapered with Arts & Crafts-inspired colors and patterns (using Sherwin-Williams and Benjamin Moore historic paint palettes and hand-screened papers from Bradbury & Bradbury). The rich shades of red, amber and green complement the natural colors of the stone and wood inside the mansion and have added much ambiance to the interior. Over the years, the mansion has acquired nearly 50 pieces of Mission-style furniture, primarily from Stickley, Audi & Co. Although these are reissued (rather than antique) pieces, they are as finely crafted as originals and lend an air of historic authenticity to the decor.

Beginning in late 2005, the mansion underwent a Capital Improvement Plan, which was completed in the summer of 2007. The project was funded with $3.1 million from Jefferson County's Conservation Trust Fund.

Located on the west side of the mansion is a stone gazebo, with a fireplace (no longer in use) and benches for the public to enjoy. Legend has it that Charles Boettcher enjoyed hunting from this bucolic spot.

The carriage house was once a three-bay garage before being remodeled in 1986 into a 440-square-foot space used for smaller events and meetings. Today, French doors extend the usable space to an outdoor flagstone patio. The second story, which once housed guests, is now home to our resident caretaker. 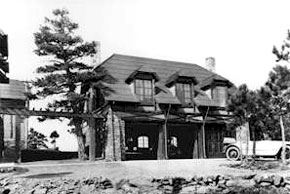 The Colorado Arts & Crafts Society is a nonprofit 501.c.3 organization dedicated to the study of the Arts & Crafts Movement in Colorado through meetings and events such as lectures, tours and other educational programs that will increase awareness of this rich heritage and stimulate interest in preservation. The society maintains a research library in Charles Boettcher's former study (the Forest Room).